City Hall will offer its approval or disapproval of the RPL request for a 2.3% increase in its mill rate. FRPL will be making a presentation to City Council about the RPL 2020 budget on December 9, 2019 at 5:30. FRPL is first on the agenda right at 5:30. https://www.regina.ca/city-government/city-council/council-meetings/ The FRPL presentation starts on page 8 of the agenda packet. http://reginask.iqm2.com/Citizens/default.aspx Also available for download here FRPL to City re RPL budget 2020 – final

Public presentations will be on December 9, City Council will then meet on December 10 to handle motions relate to budget items. So the actual vote on the RPL budget mill rate request may not occur until December 10. This two day process is new to City Council this year.

The RPL Budget will be discussed at the City of Regina Executive Committee on Wednesday, October 28, 2015 at 11:45 AM at Henry Baker Hall, Main Floor, City Hall.

The budget will then be referred to City Council meeting on December 7th.

To speak at Executive Committee, you do NOT need to send in a submission ahead of time, but simply register at the start of the meeting that you wish to speak.

Submissions/requests to speak at City Council have to be into the City Clerk’s office by 12 noon on Thursday, December 3rd.

For more details, download the Packet for the Executive Committee meeting found at
http://www.regina.ca/…/council-com…/meeting-calendar-agenda/

The RPL budget and discussion of the past year and plans for the year ahead is on pages 20 to 38 of the packet.

City Council  will holds its budget meeting this evening at 5:30 pm and the RPL budget and plans for the upcoming year will be part of the discussion.

If you cannot attend in person, the Council meeting will be broadcast live on Access Communications.

The Council meeting agenda and the package with the RPL budget and the FRPL presentation are also located here. “View Meeting Calendar, Agendas and Decisions”. http://www.regina.ca/residents/council-committees/meeting-calendar-agenda/

The budget of the Regina Public Library will be before City Council on Monday December 8. The meeting starts at 5:30 pm in the main Council chambers

The RPL’s request for an increase in its mill rate to support a 2.7 percent increase will be either approved or not approved by City Council.

The budget is contained in this document that was submitted to teh Executive Committee.

FRPL will be making a submission about the budget – if you have any thoughts or ideas on the budget, please forward them to FRPL via the contact listed on this website.

The RPL budget and related request for a mill rate increase from the Library Board goes before City Council’s Executive Committee on Wednesday Nov 12 at 11:45 am.
See the meeting agenda and the budget here.
http://www.regina.ca/…/council-com…/meeting-calendar-agenda/

The budget contains highlights of the past year and the RPL’s priorities for the year ahead – worth the read! (Only 10 pages.)
Past year activities:
– Glen Elm, Dunlop & Children’s upgrades
– Literacy Cafe and family literacy kits in several languages
– HOOPLA and digital film theatre

Upcoming:
– 2.7% mill rate increase
– commitment to North Central Shared Facility continues,
– Central Library “a new, vibrant, modern gathering place in downtown Regina. A new Central Library will become a distinguishing city landmark, an anchor for downtown activity,and a model of sustainability”
– [branches] will look more like a bookstore than a traditional library
– budget for capital and operating expenses for IT and Collections has increased….there is a strong demand not only for physical books, CDs,and DVDs, but also electronic information sources, downloadables, and streaming resources
– Makerspace conference November 28-29,
– new Service Plan to be developed
– Development Manager hired to lead fund-raising campaign for new Central Library

June 25th – RPL Consultation. More details about the event on the 25th. Please plan to attend! Note that you are supposed to RSVP to Shari Uhersky, Central Engagement <centralengagement (at) reginalibrary.ca> 306-519-6866

———- Forwarded message ———-
From: Central Engagement
Date: Fri, Jun 20, 2014 at 11:18 AM
Subject: Launch Party at RPL
Good Morning,
Regina Public Library (RPL) is pleased to invite you to take part in an exciting event occurring this Wednesday, June 25th from 7:00 pm to 9:00 pm at RPL’s Central Library. As a supporter, neighbour and friend of RPL, your support and advice is important to us. That’s why we’d like to invite you to participate in a special launch event for our public engagement process.
Please RSVP at your earliest convenience. Thank you.
Sincerely,
Shari Uhersky
Central Engagement
306-519-6866
Details
Wednesday, June 25 | 7:00-9:00 pm | Central Library
7:00 pm – Hear from a nationally renowned library futurist and award-winning architect on 21st Century libraries, and the vital role they play in city-building and community prosperity.
8:00 pm – Ask questions and offer your input.
Kid’s activities (ages 4-13) and refreshments | Everyone is welcome!
Learn more about this public process here: www.reginalibrary.ca/centralengagement
Speakers
Ken Roberts is a former Chief Librarian and member of the Royal Society of Canada’s Expert Panel on the Future of Libraries. He is a children’s literature author and award-winning writer for television and comedic plays, and has received both the Canadian Library Association’s Outstanding Service to Librarianship Award and the Ontario Public Library Association’s Lifetime Achievement Award.
Bruce Haden is a principal and architect at the design firm, DIALOG, where he recently led the design of a new library in Vancouver that incorporates YWCA housing. His projects are diverse, ranging from public buildings to First Nations projects. Bruce led the design of the Nk’Mip Desert Cultural Centre in Osoyoos, which won a 2008 Governor General’s Medal in Architecture.

Regina, SK – Regina Public Library (RPL) is pleased to announce the hiring of the public engagement firm, DIALOG, for the Board’s public consultations regarding the future of the city’s downtown Central Library. In addressing the challenges facing the Library, the RPL Board and Executive are re-engaging the public to talk about their needs and aspirations for their Library system, and their Central Library, as fundamental in properly preparing for the future.

“It is a great privilege to work with people who have such a passion for their work and understand the challenges before them, but also embrace input from the community. That means opening up a dialogue with the people who support them and the people they serve,” said Jennifer Fix, DIALOG Spokesperson.

DIALOG is a Vancouver-based company working with partners who have developed a specialty in library system public engagement through their acclaimed efforts with Vancouver Public Library and Calgary Public Library. DIALOG will now assist RPL in plotting a course for the future.

“Engaging the staff, stakeholders and public on the future of the Central Library is incredibly important to RPL and we’re pleased to work with DIALOG on this part of the project. This is a very exciting time for the Library,” said Darryl Lucke, Chair of the RPL Board of Directors.

Friends of the Regina Public Library 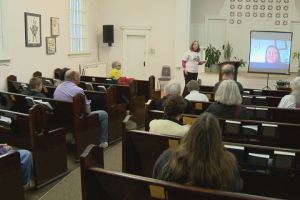 REGINA – Friends of the Regina Public Library celebrated the 10-year anniversary of the day the city voted to save three libraries from closure, Saturday afternoon.

“I owe these people so much because they gave me so much. Sorry, I’m getting a little choked up about that,” said a slightly emotional Vanessa Thorson, who participated in the celebrations over Skype at the Unitarian Centre.

Thorson, who now lives in Yukon, and several others, birthed the group in response to the city’s plan to close the Glen Elm, Connaught, and Prince of Wales branches in November of 2003.

The funding came after multiple protests, and a petition with 26,000 signatures.

“I’m very shy, but I knew I had to do it. I just had to do it,” said Catherine Verrall, who protested with the group.

Verrall got about 2,000 of the signatures, beating anyone else involved in the cause.

“I’m quite passionate about community, and I think the library is really, it’s really the heart of the community,” she said.

The sentiment was echoed at the event by those who haven’t used libraries for as long a lifetime.

“You don’t have to go there to read, it’s kind of a nice atmosphere in that sense,” said Candis Froess, a history student at the University of Regina.

Froess hopes to get into a library studies master’s program after graduation.

She’s attended the celebration to learn more about the group’s accomplishments.

“I just think what they did was pretty impressive, and I’m happy that they did it because it might set an example for other communities,” she said.

Since the victory, the group’s mission has evolved.

“In a broad sense, it brings the awareness of the public libraries to the community and how valued they are in the community, and why we need to keep them,” said Jim Elliot, a board member of the group.

And while there is always worry for what the future may bring, the group believes it’s ready.

“The Regina Public Library Board knows there’s always somebody that’s going to be watching them, and making them accountable,” said Thorson.

Friends of the Regina Public Library will be making a presentation based on this letter. FRPL to City re RPL budget 2014 – Feb 20 – final

Please attend the City Council meeting to show your support for Friends of the Regina Public Library and for our libraries.

The City Council meeting starts at 5:30. The Library budget is often one the first items discussed.

The draft Regina Public Library Budget has been put on the City of Regina website.  It will be going to Executive Committee on Wednesday, January 15th at 11:45 am.

If you want to make a verbal presentation to Executive Committee, you just have to show up and fill in a form.  You will have 10 minutes.

The recommendation is to have it forwarded to the February 24th, 5:30 pm City Council meeting.  If you wish to make a presentation to City Council, you have to provide a written brief of your remarks to the City Clerk’s Office by Thursday, February 20th at 1 pm.  You can email your request and brief to clerks@regina.ca

To see the draft budget go to www.regina.ca/residents/council-committees/meeting-calendar-agenda and then click on the Executive Committee on January 15th and then click on the agenda item EX14-1 on the right hand side and you will either directly see the budget or it will be downloaded to your computer.

Any thoughts on the budget can be sent to FRPL or to your City Councilor if you have concerns or questions.  There is likely going to be a FRPL letter sent to City Council in February.